Between 29 February and 4 March, myself and a team of volunteers from Aberdeen University were at the Loch of Leys crannog just north of Banchory in Aberdeenshire. The goal was to excavate a small trench on this crannog to see what was left of this medieval crannog site 165 years on from when the loch was drained. The excavation showed that organic preservation on this wet site is good, but not like what James H Burnett describes in 1850 immediately following the drainage of the loch. Regardless, good material suitable for radiocarbon dating has been recovered, and this will answer a major question surrounding this site – is the medieval occupation of this site sitting atop an earlier occupation of the crannog?

In 1850, the Loch of Leys was drained through a remarkable stone lined and hand cut ditch that runs for c.250m. James H Burnett took the opportunity when the loch was drained to investigate his family’s former residence on the crannog. In 1323, Robert the Bruce dispossessed the Wauchope family of the ‘isle of Banchory’ and the estate that went with it giving it to the Burnett’s as reward for their support in a recent conflict. What James Burnett found in 1850 went on to become some of the defining features of crannogs in Scotland – vertical wooden piles driven into the loch bed with horizontal timbers (he identifies as oak and birch) that make up the inner part of the crannog. Additionally, the antiquarian excavation found several bronze jugs, a quern stone for milling grain, coins (but the one of the workmen ran off with them) and a logboat about 50m away from the crannog. This was the first recorded excavation of a crannog in Scotland, but work at the Loch of Leys crannog ended there, until now.

This crannog sits within the former Loch of Leys. The bog is very wet and accessing the site is dangerous and only possible during very dry summers. We had hoped for such a summer last year where we might simply walk to site, however, that was not to be the case and Aberdeenshire saw one of the wettest summers in living memory. It was decided that the best option would be to construct a bridge made of wooden palettes during the winter when the vegetation had died back. With the very kind assistance of the Leys Estate and especially Thys Simpson, the Leys Estate Ranger, about 40 palettes were sourced to build a bridge out to the island.

With access to the site arranged, the digging could begin. We first encountered a large amount of stone. This is typical of Highland crannog sites where a capping of large (20-50cm wide) stones is encountered. The soil on the crannog is unsurprisingly very peaty. Once through the peaty soil we found well-laid stonework that was sitting atop a very dark organic rich material. When towelling through this dark black layer very small flakes of wood were encountered. Under this layer was clean lake peats and mud. The working hypothesis is that the dark black layer with flakes of wood represents the compressed remains of what Burnett described in 1850, a mass of interwoven timbers. At the very bottom of the dark black layer we found the best evidence to support this idea, the 10x15cm fragment of very degraded wood. This has probably come from a substantial piece of timber given its dimensions and very poor state of survival (smaller pieces of wood have clearly disappeared all together).

The partial survival of this organic rich layer shows how 165 years of being drained has severely impacted the survival of wooden remains. When Burnett excavated the timbers were fresh and whole, and today they are not more than unidentifiable fragments within a decomposed mass. It is clear that there is significant further potential at the Loch of Leys Crannog, but it has been much reduced since the 19th century.

The samples taken from this excavation are being processed now and will return radiocarbon and pollen analysis results in due course. Those dates will be reported here, so check back soon.

For further reading about the Loch of Leys crannog see James H Burnett’s account of his 1850 excavation. Also see:

Thanks go to the Society of Antiquaries of Scotland for funding this excavation. Thanks also to the Leys Estate for permission, and many thanks to Thys Simpson for help organising the palettes. Finally, I must thank the excavation team who worked through very wet and cold conditions; Carly Ameen, Claire Christie, Margherita Zona, Lindsey Paskulin, Peter Lamont, and Gordon Noble. 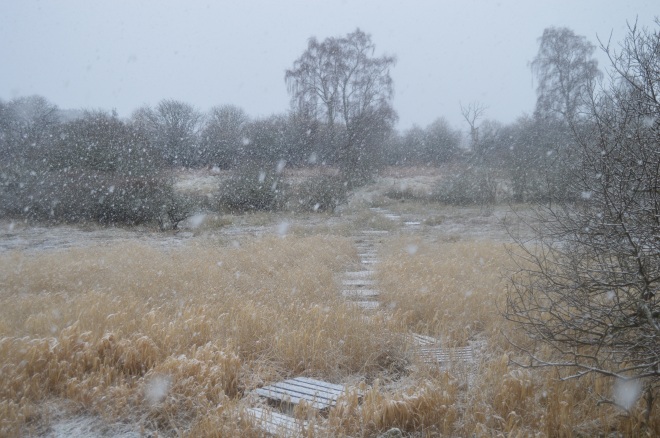 One thought on “Loch of Leys Crannog Excavation”